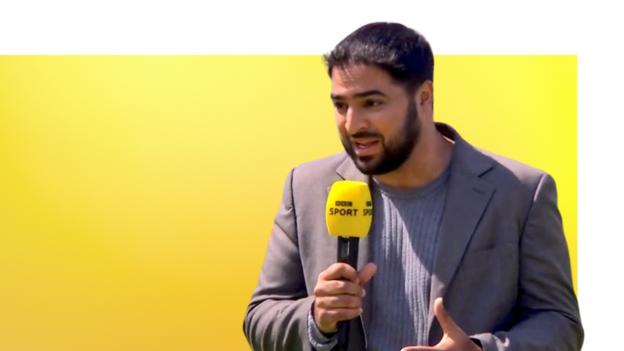 Comedian, writer, actor and TMS commentator Aatif Nawaz looks ahead to the third Test at Headingley, where he will present the BBC highlights show Today at the Test.

Headingley is a special place to me. The first time I had the chance to appear on Test Match Special was at that ground.

I could say that I'm returning to Headingley this week to do my dream job, but it wouldn't be true. You dream of things that you know to be possible, but when I was growing up I didn't know it was possible for anyone to do something like present the TV highlights of a Test match.

To be doing that now is beyond a dream.

But I also travel to Leeds with a small twinge of anxiety because of the cloud that hangs over Yorkshire County Cricket Club.

The revelations from Azeem Rafiq and others over the past year of their experiences of racism have been heartbreaking. They are stories not only of lost potential, as talented cricketers fell away professional sport, but also human tales of people falling out of love with a game they once adored.

For the England men's team to be playing at Headingley feels a bit like the game returning to the scene of the crime.

There was a time when Yorkshire were stripped of the right to hold the third Test against New Zealand, only to have it restored when they proved changes to the club had taken place.

At this point, there are a couple of things that I would like to make clear.

One is that I have never had a direct experience in cricket of the racist behaviour that has been alleged by Rafiq and the others brave enough to take their stories public.

Naturally, hearing what they said made me reflect on my own time playing the game as a youngster. Did that happen? Did that coach really say that to me? There are instances I can recall, but nothing as traumatic as we have heard in recent months.

The other is that I do not believe everyone associated with Yorkshire cricket is racist. Far from it.

I know for a fact there are some really good people working in cricket in Yorkshire who do their best every day to bridge the divide.

Having said that, there was clearly a culture at the club which had a hugely negative - even life-changing - impact on some people.

Of those, the most high-profile case has been Rafiq. It is important to say that, in my opinion, this is isn't only about Azeem the man. It is about the things that he and the others went through.

Rafiq opened the door for those experiences to be made public, and now it is about how we learn, heal and move on from them.

Still, the most spine-chilling words from this entire episode came when Rafiq said he would not let his children anywhere near the game. That should send a jolt of fear through every cricket administrator across the globe.

I have gone from being a cricket fan to someone has a small standing in the game.

I feel that responsibility. I know I have not been employed by the BBC to fill a quota or tick a box. I am here to do my job.

It is not fun to talk about racism. I would rather be able to focus on cricket. However, I also understand there is need for people in the public eye to have a voice on these things.

I believe I have a good perspective on the game. There are people who know it better than me, but from my vantage point I believe I bring something different.

I want to understand, just like everyone else, how we can make things better. How do we make things more inclusive, how do we move forward?

There are some amazing people working in cricket in this country, but at the moment I am not sure I completely trust the administrators to do what is needed - and I know I'm not alone in that thought.

The England and Wales Cricket Board have published an action plan, which is fine, and it will take time to implement.

It is up to us to watch their progress and hold them to account if they don't deliver on what they say they will do.

What does progress look like? What is change? Can things ever be perfect?

It's very hard to quantify. When we know there are people of all colours, creeds, backgrounds and orientations involved in cricket and, crucially, feeling welcome, then we will know a difference has been made.

As for me, and the hint of anxiety I will feel at Headingley this week.

Progress would be knowing that no one else ever has to feel the same way.

Elsewhere on the BBC

Cricket on the BBC